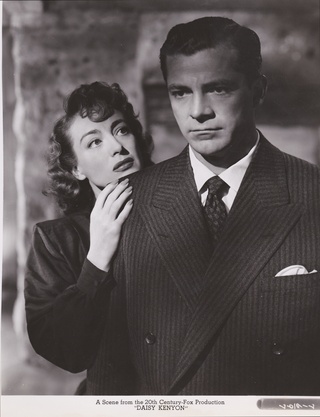 With Joan Crawford in Daisy Kenyon
Can you name any actor in the 1940s who gave great performances in a dozen films?. Here are the Dana Andrews dozen: SWAMP WATER (very dear to a man who cared about his Southern roots), THE PURPLE HEART, WING AND A PRAYER (one of his favorite performances), THE OX-BOW INCIDENT (he was really proud of the picture and of his performance), LAURA (the film that made him a star), FALLEN ANGEL (my personal favorite), A WALK IN THE SUN, CANYON PASSAGE, THE BEST YEARS OF OUR LIVES (he should have won an Academy Award for this one), DAISY KENYON, BOOMERANG, WHERE THE SIDEWALK ENDS. Read More
5 Comments

For lead actors there are at least a dozen. One is John Wayne-- not only the 5 for John Ford -- Long Voyage Home,They Were Expendable, Fort Apache, 3 Godfathers, She Wore a Yellow Ribbon -- but also Sands of Iwo Jima, Wake of Red Witch, Reap the Wild Wind, Red River, Tycoon, Dark Command, Seven Sinners, Shepherd of the Hills, and others.
Among supporting actors there's the always reliable Walter Brennan with Red River, Blood on the Moon, My Darling Clementine, Nobody Lives forever, To Have and Have Not, Swamp Water, Pride of the Yankees, Sgt York, Meet John Doe, The Westerner, Hangmen Also Die, North Star,Task Force, and on and on.

Thanks, Bill. Walter Brennan was a phenomenon. In Hangmen Also Die he plays a Czech professor, in Sergeant York a pastor, in Meet John Doe Gary Cooper's itinerant sidekick. And the others you mention too. It's why I'm going to write a biography of him. And I'm looking forward to your new book in film noir. I'll have more to say about that in subsequent posts.

Carl, did you get to interview Farley Granger before he passed away for the Andrews biography? They starred in quite a few movies together, both being under contract to Goldwyn.

I wrote to Farley Granger, but he never answered. Perhaps he was already ill or felt he had said it all in his autobiography, which I did find quite useful. The same is true of Piper Laurie. She was writing her autobiography and did not want to be interviewed. But she, too, had some very interesting things to say about Dana. They did Smoke Signal together.

I forgot to say I reviewed Piper Laurie's autobiography for The Washington Post.